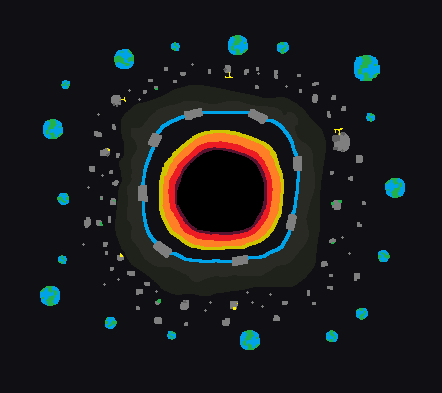 An image of Cabastis, the thematic center of the WORMHELL universe.

So, back on december 10th, I had a thought that started a series of events that led to WORMHELL...

What is Dante's Inferno actually about?

Now, at that point, that was just a tangential idea. Heck, I thought the thing was a book called "Dante's Inferno" at the time, not realizing that it was really a poem called "Inferno" by Dante. I didn't even know the thing was in Italian! So, after taking the car back from school, I'm sitting back at home and I just pull up the wikipedia page for it and start reading.

Before I say this next bit, you need to know something about me. I read a lot—like a lot—of fantasy and science fiction books. And, with all of those stories circling around in my head, sometimes I like to make up some fictional worlds of my own. I usually make up some sort of large, dramitic orgin story, or some sort of shocking twist, but I never really end up going anywhere with it. That's because it never serves a purpose. What is originating from my origin? what story takes a unbelievable turn? none.

However, as I scrolled through the page, actual, genunine inspiration hit me. What if I used the idea of nine horrible levels, each with the theme of a sin, as the basis for a universe? As one does, I started up google docs and just started to put ideas down on the page. Whatever struck my fancy, you know? But then, an hour later, things are still striking. At this point, I realize that writing for a purpose—in this case to make the denzins of my universe go through hell—was what I needed to acomplish creating a universe. If there was no core theme of mass suffereing, corruption, and general misdemeanor in my universe, I'd have no idea where to go with it. So I put what I had together, formatted it so it would give the reader a feel up enjoyment, gave it a name, and got writing.

If you read The Why, you probably have got some of it down by now, but WORMHELL is the name for a fictional universe that I'm writing in my free time. It started as a idea loosely based around hell from Inferno, but eventually transitioned into a universe based around the darker side of personality. The important parts of the WORMHELL universe are two galaxies that have collided, creating a particularly large supermassive black hole. Around this black hole, called Cabastis, is a series of areas where intelligent life has descended into corruption and treachery.

You can read the document that contains all of what I have written so far here. Currently the latest version is version one, uploaded on the 11th of december. I planned to add more in the future, but I'm not sure when.